Just want to say thank you to Saulsbury Industries for the Tickets and picnic.  Looking forward to attending tomorrow.

Something I forgot to post from last week when I picked up my CPAP from the Medical Supply store. A Marine Vet was training me on how to use it and we just got to talking. PTSD mainly but also the Veteran Fishing Program. But this just came up. His words resonated with me regarding a hot topic among some MilBloggers. He said, “The military takes a boy, makes him a man, trains him to use weapons to kill fake human targets, then sends him to war to kill real human targets so when later they are psychologically affected, non-profit groups that believe that they can help them deal with the affects of killing by giving them a weapon to shoot more fake human targets or take them hunting to kill live animals.” At that moment, I just paused. It was a WTF moment. I support Fishing for Heroes. I’m looking forward to attending a trip one of these days.

Back off of Chris Kyle

For what it’s worth, and it may not be worth anything to some. But in my humble opinion, I believe Chris Kyle’s recollection of his medal count. One thing that I found out with my own military record, especially after the Gulf War was that paperwork was not always completed and copies were not made ready available to us. Some of my own medals and awards I had to submit to have them added because my DD214 was incorrect. And because of that I also have a DD215. But even with my corrections, there are still subsequent awards that I have no copy to prove to the Army that I in fact received them. I know I earned my second Army Achievement Medal, Army Commendation Medal, and Good Conduct Medal but I have no record to prove it. All I have is my word. But for Stolen Valor witch hunters, that means nothing. In the original article someone was quoted saying that “the process involves people and inevitably some errors may occur.” Those omissions do not make this Veteran less of a Hero. And his claim to those awards do not make him a embellisher. He earned those awards too. I believe Chris Kyle. I have no reason to doubt him. Why his record is being questioned after death is beyond me. What shows on his current DD214 reflects nothing less than of a Hero. God Bless you Chris Kyle and Thank you for your service

It amazes me that a Veteran would bash another Veteran.  Regardless of political ideology, it is something that I do not do.  We can agree to disagree.  But to lower yourself to acts of childish bullying takes away any honor and respect you have earned.

So what is all this about?  There are individuals out there on the opposite end of any political spectrum who choose to besmirch a Veteran’s character if they don’t agree with them.  It doesn’t matter to them how it makes them look.  To them creating disparaging MEMES of an individual with lies and sharing it across the internet is perfectly okay.  They try to encapsulate it in “their Right of free speech and Fair Use.”  And they believe that makes it okay.  They don’t think about that person’s family, they don’t think about that person’s livelihood, all they care about is making themselves feel superior to the other and for some sick reason it makes them feel good.

I consider myself an honorable person.  I have enough integrity not to dishonor a fellow Veteran.  I will not mention their names or affiliations.  I will also not personally respond to a bully.  And, I also know that I have just as much access to the internet to make a few MEMES myself.  But I will not.  Why?  Because even though we disagree politically, I respect their service and them as a person.  I also respect their family.  To me it doesn’t matter if I don’t know you personally or if we have ever met or communicated.  To me it is courtesy.

It is difficult for me understand why a highly decorated, senior NCO Veteran, would act like a bully.  They lose all decorum and discredit themselves in a manner that is unbecoming of soldier. Once a soldier always a soldier, so even after our service we still have the duty to act in the manner of a soldier.  So being a bully to another veteran is sad.  What is even more sad, is that their followers will actually enable this behavior and cheer him on!!

So the message is stop being bully.  Show some honor and decorum.  Set an example of your service and be an example for others to look up too.  Being ugly to someone doesn’t look good on you.  It just makes you look bad. 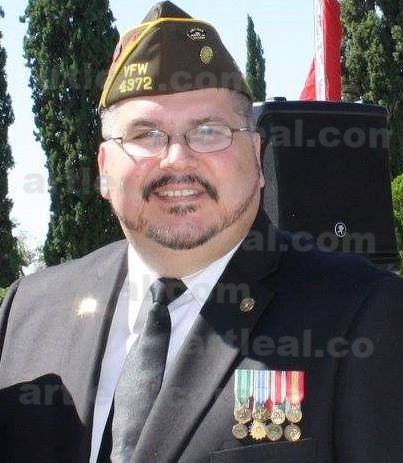 On January 8, 2016 the discredited milblog site, thisainthell.us, posted an inflammatory article directed at me regarding an interview I gave KMID.TV regarding a “leave behind card” for businesses that I would “potentially frequent” and who allowed open carry.  The card as seen here makes reference to a few of key points.

Lastly, it states that I will never be back.

Immediately after release, the above reference milblog site was tipped off and in a “shoot first, ask questions later” fashion, shot off an article immediately suggesting that it was politically motivated because I was a Democrat.

It says that Art is a combat veteran who suffers from PTS and that he won’t be back to the business to spend his pennies because the sight of a gun triggers his PTS. I’m sure that the business owners are relieved that he won’t be back in Art Leal’s case. See Art is a Democrat politician who clearly has an agenda– to pander to the anti-gun nuts. I’m guessing that there are a few of those in Texas.